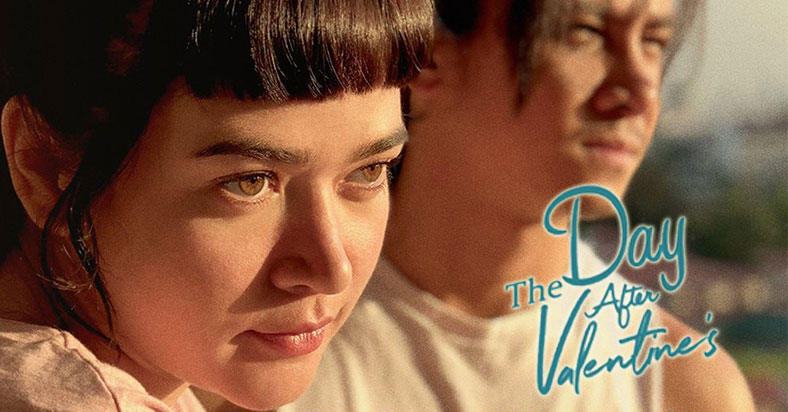 The Day After Valentine’s, a story about healing through self-love and forgiveness. An excellent chick flick. Comedy, romance, and drama.

The feel of it

I’ve said it before, I’ll say it again: Bella Padilla is underrated. Bela once again indulges her fans with her outstanding acting. I think Bela’s best niche is drama. Watching her in scenes where she has to cry never fails to amuse me with its simplicity. The feel of watching her is normal and nothing too over the top. Although I have some qualms with JC Santos. JC, even though he’s rip, he’s a bit innocent for his role as Kai. I’m not sure if that’s where they were heading with his character but I feel like it would have been better if he exerted more maturity on his character.

The movie primarily focuses on their characters, so there’s little screen time for any other actors. Which is really not a problem since that kinda highlights just the important parts of the story. So there’s no room in the plot for stereotypical kenkoy friends or the baklang best friend we usually see in other pinoy rom-com films. Though there is a sayawan moment at the beginning of the film, it definitely isn’t cringey to watch.

Romantic, check. Drama, check. Funny, so-so. We’ll it didn’t have to be too funny anyways. Too much comedy could actually ruin the drama backdrop of the plot.

Watching The Day After Valentine’s made me emotionally invested to Lani’s life. A woman who is portrayed to be strong and independent, but in reality she’s in denial of her weaknesses and tries to hide them. Bella Padilla greatly portrayed a person suffocated by her inability to let go of her past transgressors.

A third of the movie was shot in Hawaii to make it look edgy. But there is one particular scene that ruined it for me. The grocery scene. That scene seemed like it was done in a rush. The color grading was off, lighting was bad, and the camera handling was just shaky. Other than that, it’s all fine.

At the beginning of the movie, Lani (Bela Padilla) seems to show an emotional attachment to Kai (JC Santos) who on the other hand seems to be indifferent of her. She asks him if they could see each other and he agrees to meet at the club where he was currently at together with his friends. She hopes that Kai would show a welcoming attitude when they meet but to her dismay, Kai didn’t give her the attention she was craving for from him. Lani proceeds with binge drinking at the club until she became drunk and had to be taken home by Kai.

At the car, Lani confronts Kai about the status of their uncertain relationship. She recalls her past being with him as ecstatic especially on Valentine’s days but things have gone downhill for them now.

The movie flashes back to the time they first met. They met at a clothing shop one night where Lani works as a sales attendant and Kai was a customer looking to buy some arm sleeves. After being stranded in the shop due to heavy rain, the two were able to leave together and have dinner for the night. They became good and close friends from that point.

As time passed by, they became emotionally dependent to one another, especially Kai. Kai was depressed and had tendencies to inflict harm to himself by cutting wounds on his arm. This was due to his guilt when her previous girlfriend left him. His time spent with Lani was therapeutic and helped him gradually move on from the past. They watched movies together, strolled the park, and played trivial games. They enjoyed each other’s company and became fond of Baybayin. He also shows great appreciation to Lani for helping him heal his pains in life.

Kai was also a Fil-Am. He couldn’t legally stay any longer in the Philippines and needed to go back to Hawaii where his parents lived. He asks Lani to come with him and Lani agrees. They go on a sweet adventure in Hawaii where they were able to express their true feelings for each other. But soon Lani became worried that Kai might not fully accept her once he finds out more about her past. Lani was not able to disclose to Kai about the physical abuses she suffered as a child. Her back was scarred from hard lashes she endured from her abusive father causing her to be insecure about her body. Eventually, she also became skeptical about Kai’s willingness to commit to their new found love affair since it wasn’t even clear if he was going back to the Philippines for her. The two were faced with two options, either immediately stop their affair or Kai should return to the Philippines if he wanted to continue their relationship. They agreed on the latter but Kai also had to stay in Hawaii temporarily to find work. Lani then leaves for the Philippines with high hopes that Kai will soon follow her.

After a period of waiting (they never lost touch of each other through social media), Kai tells Lani that he’s finally going back to the Philippines. This made Lani happy for a moment but then realizes that Kai is only coming back to the Philippines for a family vacation and not exactly for her. This put her in a much more depressive state and more weary of her past and the anxiety of being unwanted.

The scene is back to their confrontation in the car from the club. Lani is deeply upset about the lack of interest Kai shows for her on his return, saying that he’s more interested with his friends at the club than her (which she later finds out they’re his cousins). She tells Kai that she wants him to be there for her the same way she was there for him. She needs him now more than ever as she herself needs healing from her past. She wants their relationship to work out. But Kai doesn’t want a relationship anymore. He’s only willing to be there for her as a friend. At the end, Lani was able to accept that there was nothing she can do to make him want her and decides to go home by herself. Guilty, Kai tries to console her but she asked him if she could slap him on the face instead. He allows and Lani follows up with a hard slap on his cheek which made him momentarily stunned. They laughed it off and reconciled as friends. Kai remembered that it’s Valentine’s day the next day and asked her if she’s free to go out. She says she’s not free and would rather go out the day after Valentine’s.

Lani is later seen happier and more comfortable with herself. She has moved on from her past and looks to be in the path of forgiveness towards the transgressions of her parents as she sits by their tombstones at the cemetery.

“The Day After Valentine’s” depicts a person’s anxiety about being unwanted and being very different from others. People always try to find other people to fill in a void of love and attention that expected people has failed to do so.  In the case of Lani, it was her parents who failed to provide her with love and care. People with similar pasts and traumas fail to accept that forgiveness is essential to free themselves and that self love can also be a great help in hard times.

She left her family to live on her own so she can avoid the abuses. Though her being alone might have helped fend for herself and be strong, “fleeing away” and hiding the pain became part of her day-to-day survival. This is not good as unsolved emotions only built up within her.

Meeting Kai, she gave what she can give to him to help him live his life again and to stop hurting himself with an expectation that he can do the same for her. The difference was that Kai used her help to actually heal himself from his pains but Lani, who was unwilling to face the root of her problems, was going to use him as an escape. Thus never really breaking from the pain and would just be pathetically dependent on what love Kai would give. Kai realized this for her at the end and thinks that an affair might not entirely be good for her.