Here we go again with another movie breakdown where we try to analyze scenes. Here’s a deeper look at Carlo Ledesma’s Sunod (2019) starring Carmina Villaroel. 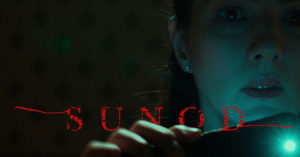 1.) Nightmares – Olivia, or Liv to her friends, often experience nightmares of the death of her daughter. Her nightmares may represent her deeper struggle to accept the possibility that her daughter might not survive her illness.

2.) Foreshadowing – Two unknown figures enter Liv’s dream and proceeds to bury her daughter. The girl suddenly opens her eyes signifying that she’s still alive and there’s still hope for her to live. But the two unknown figures continue to try to bury her anyway despite Liv’s plea for them to stop. This foreshadows the two entities who will be victimizing both the mother and daughter.

3.) We find that Liv’s daughter, Annelle, is confined in a hospital. The hospital bills are getting higher by the day and Liv declines to have Annelle transferred to a ward to avoid compromise on quality care.

“Annelle! Annelle! Annelle!” – Annelle shares her great dream to her mother where she was performing at the concert grounds of Mall of Asia to which her fans were cheering for her name.

4.) Money is tough, so Liv tries to look for ways to further fund her treatment and stay at the hospital. She applies for a job as a call canter agent at a student’s job fair. She’s hired by an agent of Liboro Global Services (LGO) after a quick rebuttal of proving her worth and having the agent impressed by her English fluency.

5.) Olivia arrives at the Liboro House in Escolta for her first day as a trainee. The Liboro House is shown in a wide angle to emphasize on its influence on the plot and how mysteriously powerful it is over the protagonist. A homage to William Friedkin’s “The Exorcist” (1973).

7.) LGO is situated at the 4th floor of the Liboro House. The 2nd and 3rd floors are under renovation and their only access is only via the elevator. Olivia becomes a customer support representative for the client TSP Bank Card.

8.) Karen Liboro, owner and head of LGO, watches over Liv from above. Her peculiarity on watching over Liv’s actions foreshadows her future role of safeguarding her.

9.) Liv befriends Mimi who calls herself a “Professional Trainee”, one who only comes to work for training but jumps to another company before the actual work is given to her.

“May takot kang mararamdaman, kasi hawak mo ang buhay niya” – Olivia shares her struggles as a single mother to Mimi and how it feels to have a child depend on her.

10.) First disturbance. Liv’s call is disrupted by a voice of a young girl.

11.)  Liv is now experiencing strange things. The elevator she takes for work takes her to the basement instead. She also discovers a barricaded door at the basement as she tries to navigate her way out of it.

12.) Nerisa, a young ghost, appears to Liv. She doesn’t utter a word, making Liv think that she’s just lost and escorts her out of the building. Once out, Nerisa disappears into thin air.

12.) At the hospital while they’re sleeping, Liv doesn’t have a clue that Nerisa actually followed her and has taken possession of Annelle’s body. A homage to Joost and Schulman’s “Paranormal Activity 4” (2012).

The next day, Annelle is miraculously healed of her illness and was allowed by the doctor to go home. Liv thanks the doctor to which he replies “Don’t thank me. Thank whoever is watching over Annelle”

13.) “May mga boses, kinakausap ako” – An obviously scared and paranoid Annelle awakens Liv in the middle of the night. She’s showing abnormal behaviors while her mother tries to calms her down.

While still frantic, she runs back to her room. When Liv tries to catch up with her, she sees Annelle all wrapped up in her blanket and sleeping as if nothing happened.

14.) “What happens in LGO, stays in LGO” – A subliminal message from Lance to a traumatized Liv.

In her moments of vulnerability, the company’s Team Manager named Lance, extends financial support to help Liv pay for her daughters hospital bills. But his help comes with perverted motives. Lance tried to sexually abuse Liv at the female’s sleeping quarters of LGO. Luckily, Liv was able to fight him off. The incident goes unreported after Liv still used Lance’s money to pay off her debts.

15.) Lance is hunted down by Nerisa at the basement after finding out what he has done to Liv.

He is later murdered by Nerisa with a lead pipe.

16.) “child behavior changes” – Liv’s google search to try and find out possible reasons of Annelle’s behavioral changes. She has taken notice on Annelle’s different character traits ever since they’ve come home from the hospital. On her online search, she stumbles upon demonic possessions and the history of the old Liboro House.

17.) An old man and his revelations – After the death of Lance, Dr. Liboro, father of Karen and owner of the Liboro assets, shows Karen a security footage of Nerisa’s ghost killing Lance. He then tells the truth about her mother’s death and the dark past of the building with Nerisa.

18.) 1970 – Dr. Liboro reveals that the Liboro House was acquired by his family that year. It was bombed during World War II in 1945 and was reconstructed later to become a hospital. The hospital was headed by him and his wife, Karen’s deceased mother.

19.) Evil in a sheep’s clothing – Dr. Liboro recalls that Manila had so many illegal settlers at that time. He and his wife decided to accept Perla and Nerisa, who claimed to be poor and looking for shelter, to live and work for them at their hospital. Strange things started happening since then that ultimately lead to the murder of his wife by the young Nerisa in a failed ritual.

20.) After witnessing his wife’s death at the hands of Nerisa, Dr. Liboro kills Nerisa in a fit of rage. He strangles her while saying “Mamatay ka na!“. He then proceeds to burn their room and barricaded it. He regretfully tells Karen that he should have burned the whole building instead.

21.) A bad deal – Liv offers to help Nerisa search for her mother and her corpse if she would then leave her and her daughter after.

22.) Liv avails Mimi’s help to drive them around Manila in search for Perla. Nerisa points where to go as Mimi drives for them.

23.) After finding her location and being reunited with Nerisa, Perla fabricates a fake story about the Liboros and how she and her daughter never saw each other again because of their wrongful deeds. She tells Liv that the Liboros told her that her daughter died of tuberculosis without showing her the body and just sent her away.

24.) The group with Perla head back to the Liboro House to search for Nerisa’s body. The last part of their deal. They head down to the basement and remove the barricades from its door using the same lead pipe that was used to murder Lance.

25.) After removing the door’s barricades, they’ve uncovered a burnt room with diabolical objects around, including an upside down crucifix. This immediately angered Liv and demanded Nerisa to show her where her body was.

26.) Moments before being murdered by Perla with a kitchen knife, Mimi states her feelings with “Hindi tama itong lugar na to” while observing the remains of the room.

27.) While the possessed Annelle straps down Liv on an operating bed, Perla prepares her ritual items. A red yarn and a needle-like shank which will be used as a sort of bridge to merge her soul into Liv’s.

In Jewish mysticism, red wool yarns are often used by practitioners of Kabbalah by tying it on the left wrist as a bracelet while saying a Kabbalah prayer. It’s meant to remove unwanted energy to make room for wanted energy in the body.

28.) Perla resumes with a ritualistic dance and rubs the dirt from the rooms floor onto herself.

29.) Seeing the monster – After being connected with the yarn, Liv sees what Perla really looks like. We are now also able to connect her nightmares as a premonition to this. It could be that her dreams were warning her or it was leading her to this moment.  But before the ritual can be completed, she is saved by Karen who was able to detect their presence in the Liboro House via security cameras.

*Images are screenshots from official trailers and from other publicized media contents.