Sunod (2019) is a horror film that depicts a mother and daughter’s fight to survive a paranormal possession caused by the haunting of a young girl’s ghost from an old building with a buried past.

For more about “Sunod”, see the movie’s scene breakdowns here!!! 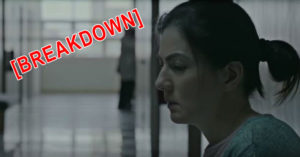 There were instances in the movie when I though this might be one of those “mayaman versus mahirap” stories where the rich is once again vilified by exploiting the poor. But it’s great that the movie tries to stick with the horror feel and averts that cliché by progressing with an interesting back story.

Sexual harassment in the work force

Addition to the problems the protagonist was facing was sexual harassment from her manager. The movie sheds light on the behaviors of sexual predators and how insidious they are like the ghost Liv was facing.

Olivia (Carmina Villaroel), or Liv to her close friends, is a single mother who’s striving to save her daughter’s life, Annelle (Krystel Bimner), who was at the hospital. In an effort to pay her rising hospital bills, she lands a job at Liboro Global Outsourcing (LGO) and hopes to avail their salary and benefits to supplement the funding for her daughter’s needs. Headed by Karen Liboro (Mylene Dizon), the company is also situated in her rich family’s property building called Liboro House on the 4th floor.

Just when things were becoming great for Liv at the office, things took a darker turn for her when she is stalked by a young ghost named Nerisa. She unknowingly frees the ghost of Nerisa who seemed to have been trapped in the Liboro Building for quite a long time.

The story progresses with the ghost of Nerisa possessing the body of Annelle and Liv evading sexual harassment from Lance (JC Santos), her Team Manager at LGO. She soon finds out about Annelle being possessed by Nerisa after noticing some unusual behavior.

After realizing that it was the ghost of Nerisa and not her daughter that she was with, Liv makes a deal to help her by finding her mother who she was separated with back in the 1970’s. She made a deal so that Nerisa can finally leave her daughter. It is later revealed that Nerisa was murdered in the Liboro House, which was a hospital back then where her mother, Perla (Susan Africa), worked as a custodian in the 70’s. Her mother was sent away after being lied to that her daughter died of tuberculosis. After finally being able to track down and meet up with Nerisa’s mother, they head back to the Liboro House to try to help find her buried body.

But in another revelation from the side of the Liboro family, we found out that Nerisa and Perla were truly demonic in nature and that they were trying to pass on their evil nature to the wife of Dr. Liboro, Karen’s father (Freddie Webb), in a botched ritual. It’s seen in a flashback that Nerisa killed Dr. Liboro’s wife consequently making him kill her by strangulation out of anger. Thus trapping Nerisa’s soul in the building ever since.

After being lead back to the Liboro House by Nerisa and Perla, Liv with her friend Mimi (Kate Alejandrino) are taken to the old room where Nerisa and Perla used to stay in when Perla was still working for the Liboro family’s hospital. The room shows an eerie scene of an upside down crucifix and other diabolical imageries. Mimi is then attacked and killed while Liv is held down by Annelle and prepares her for the same ritual they once planned for Dr. Liboro’s wife. But just before the ritual is completed, Karen comes to rescue her by fighting off Perla. Nerisa, who was still in possession of Annelle’s body tries to escape but Liv catches up with her and manages to drive her out of her daughter. Annelle is now freed from the possession bu now needs to be in the hospital again.

The movie ends with a cliffhanger but also with a clearer indication that Perla was actually successful in transferring her evil nature not to Liv but to Karen. Signifying that Liv’s ordeal was not yet over.

My personal thoughts on it

Yes, I liked it. I would also recommend it. After seeing this, I feel like the horror genre in the Filipino film industry is really getting better. Better plots, better actors, better scripts, and better production.

Some mysteries were left unsolved. Like how did Nerisa ended up being trapped in the Liboro Building after her death? I understand that not everything can be explained by detail especially for horror stories based on paranormal concepts. Sunod made an adequate job in pulling this off anyways.

Carmina Villaroel was also amazing here. Things felt natural watching her on the big screen. Nothing over or under with the portrayal of her character. Krystel Bimner who played Annelle was also a great deal of talents. She performed a song with her guitar, played a sweet daughter and a diabolically possessed one at the same time. I don’t think I’ve seen better acting from other young or teen artists today or back in the days in the 2000’s. Even the extras and supporting actors and actresses were great. The story itself is actually simple and easy to follow through so it’s actually the artists’ acting that made things way more interesting.

Sunod also had a dark and hazy tone for it’s visual feel. Making the audience really anticipate the coming horrors. The effects didn’t look cheap either especially at the peak moments of the movie. I can honestly say that this can pass for a Hollywood film.

My theories on the plot

I think the Liboro House itself has magical powers. At first I was wondering why Nerisa’s ghost was trapped in that building for decades and why didn’t she and Perla just performed the ritual on Liv right away after finding her location. Why did they even have to go back to the same room of the Liboro House’s basement?

The answer might be found in the details. After Perla and Nerisa were successful at leading Liv and Mimi there, we see Perla grabbing a handful of ashes or soil from the room’s floor. And then she proceeds to rub it all over her body. Perhaps that dirt has a purpose, like a special ingredient for the ritual. Or perhaps the ground of that building itself is a sort of ritual ground and the building that has been erected on it serves as a cover to protect or hide it from the public.

Whatever the building’s purpose was, it looks like Perla and Nerisa were highly interested at that location for their ritual. It seems like there’s no other place they would rather do it but there. And something in it was powerful enough to trap Nerisa’s ghost.

Dr. Liboro also says that he should have burned the whole building to the ground instead of just the room. Why didn’t he? Maybe he also knew something more about the building before his family acquired it in the 70’s.

For more about “Sunod”, see the movie’s scene breakdowns here!!!