Hello, Love, Goodbye (2019) is a romance-comedy-drama that depicts the struggles of a young Filipina domestic helper caught between her dreams and love affair in one of the most demanding cities in the world, Hong Kong.

The setting is quite scenic and the movie does a good job in capturing iconic sights. It almost gives you the feeling of traveling while immersing yourself to the characters quirky antics.

It also sheds light on the difficulties OFW’s face in Hong Kong, particularly from the perpective of the domestic helpers. The cultur shock, the sense of unbelongingness, feelings of not having any choice, and the need to rise above the situation to make their stay bearable.

It’s also nice to see Kathryn Bernardo team up with another co-star other than Daniel Padilla for a love-team story. Alden Richards offers a refreshing feel on the screen with Kathryn. But I would really wish for Kathryn to be casted in other genre of films. She seems to be stuck in this kinds of movie. Am I the only one who notices that?

While watching the film, I could almost tell how it was going to end. I was recognizing a story pattern similar to the movie “Coyote Ugly“. It’s about a girl with dreams, who moved to a big city. She is emotionally lost and burdened with money problems and not knowing if she will ever achieve her ambitions. But she meets a cute man who stands by her and supports her. They fall in love while the man actively participates and contributes in her emergence. But later gets into a fight with him because the man feels that she chooses her dreams over him. Just when everything is about to crumble again, the man puts aside his needs and expectations for the sake of the girl. They get back together, and the girl fulfills her dreams as the man cheers for her.

Yes. Hello, Love, Goodbye has the same plot with Coyote Ugly. The man martyred for the sake of the ambitious princess is a common trope in chick flicks. 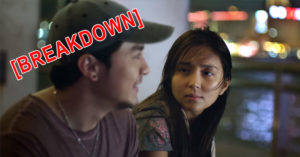 Joy (Kathryn Bernardo), a Filipino domestic helper in Hong Kong, is in distress as her job is in jeopardy. Due to unfortunate circumstances from her employer, she is forced to make a risky decision that might get her deported. She decides to take second job as a waitress which is forbidden by the law.  She meets Ethan (Alden Richards) at the bar where they work and he shows his appreciation for her by offering her a drink.

On that same night, Joy almost got caught by the authorities as they chase her through the alleyways. Fortunately, Ethan was able to catch up to her and she kisses him on a desperate attempt to hide her face as the cops were passing by and looking for her. This makes things exciting for Ethan as he starts to pursue her romantically from this point on

Ethan on a regular basis sends cheesy massages and calls Joy on her phone to get her attention, to which at first Joy finds irritating as it interrupts her work. But she soon finds herself longing for him. They became more open to each other especially at the point when Joy emotionally breaks down from all the responsibilities and burdens she has.

Ethan becomes her “shoulder to cry on”.  Joy shares to him that she has plans of migrating to Canada in four months. She dreams of using her educational background as a nurse in Canada and vents out that she’s tired of being a domestic helper as it doesn’t give justice to her her self value.

As time went on, Ethan’s admiration for Joy becomes deeper. He pursues her and courts her. He even helps her out with some of her side gigs for extra income. Ultimately, his efforts lead to a real relationship with her. But with the expectation that it would only be temporary since Ethan mentions that he wants to make the most out of their time while she hasn’t moved yet to Canada.

Ethan realizes that he wants to have a much more committed future with her. He plans to put up his own bar so he can support both of themselves. He was even able to get funds to start up the business. But when Ethan proposes this to Joy, she declines.

In an emotional argument, Joy stands firm with her dreams to go to Canada telling Ethan that she doesn’t want to let this opportunity pass and have a future where she regrets making the decision where she’ll constantly ask herself “what if?”. Ethan feels that all of his efforts for her were invalid and that he wasn’t enough for her.

A few days later, they get back together and Ethan proposes to Joy not for marriage, but for her to be with him for the rest of her days in Hong Kong. Ethan shows his full support for her dreams and they go on a scenic adventure around the mega city.

The movie ends with Joy at the airport preparing for departure to Canada.

The movie is entertaining but it lacks the punch for it to be a memorable one simply because it’s a common story in the chick-flick genre.

It’s usually common for us women to blush when a man gets out of his own way and puts on a good amount of effort during courtship and especially during the relationship.

In the movie, Ethan was happy to put his needs aside for Joy’s sake. But in reality, that can be very devastating. Whether you’re a man or a woman, it can be very traumatic to be put aside for the sake of your partner’s dreams when you know for a fact that you’re more than willing to help make those dreams a reality. No compromise is even needed, just true love and support.

Another problem I see is that the audience might think that Ethan, or men in general, are possessive and obsessive. That Ethan was only acting out of his own accord. But Ethan was in fact the only one willing to go the extra mile for Joy. Her journey to Canada would have not even been possible if it wasn’t for him. That’s why I feel bad for Ethan because he was forced to accept what he did not deserve.

It might be right to say that Joy didn’t owe Ethan anything, because Joy never forced him to do her any favors. But if it was the other way around, if it was the man who left the woman who helped and supported him for the sake of his ambitions, the whole world would cry foul. See the double standard there? I want a better ending for Ethan!

“Kung ‘Di Rin Lang Ikaw” is a song that expresses deep hurt and dismay about a failed relationship where the lover questions his/her ability to move on or find love from someone else.