Here’s a breakdown of the movie Block Z (2020). We’ve listed here some interesting things for a much more in-depth review about Mikhail Red’s horror flick.

1.) “Too epidemic prone to communicable diseases” – The Philippines is described to have a low fighting chance of combating a viral outbreak as news about a new disease is spreading through out the country. A homage to Zack Snyder’s Dawn of the Dead (2004) by George A. Romero.

2.) Princes Joy (Julia Barretto) or PJ to her friends, is a med student nearing her graduation day. She has distant feelings towards her father Mario even though he tries his best to reconcile with her after being absent in her life.

“Matibay ang lahi natin” – Mario tries to cheer up PJ with his small talks on their way to her school. A foreshadowing of their immunity to the new virus.

3.) San Lazaro University – The university is named after St. Lazarus. In the bible, Lazarus was dead for days but was resurrected by Jesus Christ. In John 11:4, Jesus states before raising Lazarus “…This sickness will not end in death…”. The use of St. Lazarus’ name is a reference for the movie’s theme of the rising of the dead.

4.) “PJ, tama na!… Time of death, 4:06 PM” –  PJ is stopped by a doctor from resuscitating a woman who died from the disease which was believed to originate from the outbreak. Symptoms was likened to rabies but PJ notices the woman had a human bite mark.

The student is dragged near a ward curtain as he is mauled by the woman. A homage to Alfred Hitchcock’s Psycho (1960).

6.) PJ’s father, Mario (Ian Veneracion), was at the same hospital at the San Lazaro University when things started getting out of control. Screams at the hallways can be heard as panic occur.

7.) “The patient, she came back to life!” – Myles frantically tells his Block Z friends and their teacher, Prof. Jameson, that the woman who just died is once again alive. At this point, the situation has deteriorated for the school and a lock down is imminent. Infected people has started spreading all through out the school.

8.) Ruby, the daughter of the infected woman curls down out of fear because of the desperate situation at the hospital. She is then rescued by Bebeth, a lady guard of the university. A homage to Marc Foster’s World War Z (2013) 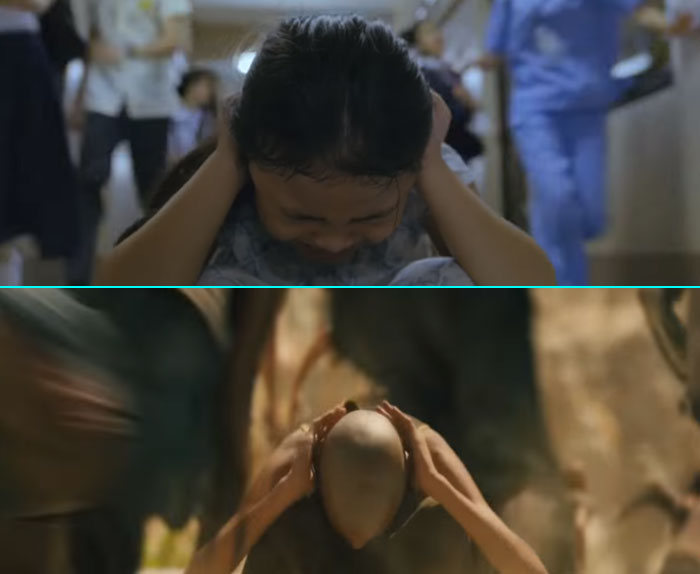 9.) The university’s basketball team watches in horror as their coach is mauled by an undead attacker who recently moved out from the vicinity of the school’s hospital.

10.) “Asintado ako” – Bebeth, saves Mario at the earlier stages of the school’s lock down while she looks after Ruby. They team up in search of his daughter in the campus.

11.) “Please stay indoors and remain calm” – Chancellor Brazal orders over the school’s communication radios to stay indoors as he further asses the situation.

12.) The power of social media. Vanessa watches shared videos in social media on what is happening outside the walls she is confined in.

13.) The horrible ordeal is seen through the school’s security camera footage. Reminiscent to the Columbine High School Massacre, a school shooting which occurred in Columbine, Colorado USA back in April 1999.

14.) Soldiers open fire at people trying to escape. The government has locked down the entire university. A homage to Yeon Sang-ho’s Train To Busan (2016). 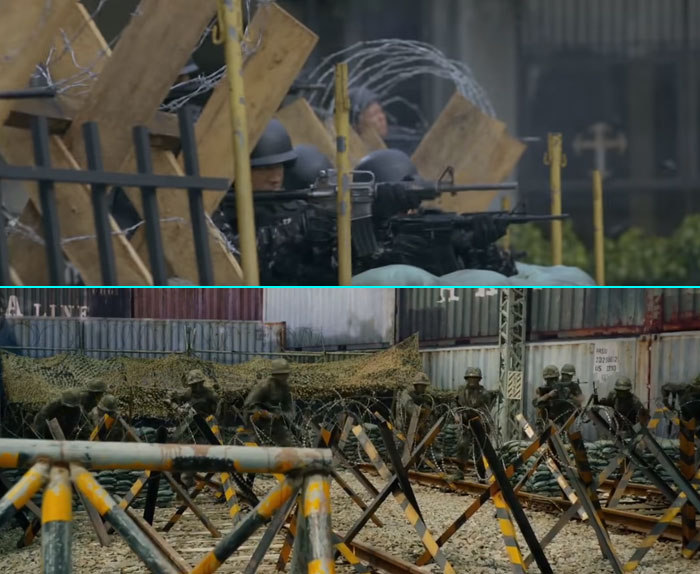 15.) PJ and her friends plan an escape as they plot their escape routes on the school’s map.

16.) Night has come, Bebeth and Mario shares a few shots of Tanduay rum at the schools pantry kitchen while Ruby eats ice cream.  A temporary relief and refuge as they momentarily put aside the troubles of their situation and plan their next steps. A homage to Steven Spielberg’s Jurassic Park (1993).

17.) Vanessa confronts Gelo about his selfishness and not helping others. She shames him for not using his position of privilege to help those in need in this time of crisis. Gelo, a son of a military general, secretly has plans of escaping via a military helicopter his father will send by 5:00am. He argues with Vanessa  as he tries to justify his selfishness but accidentally pushes her over the staircase and kills her instantly.

18.) PJ and Lucas gets separated from the group after being overrun by the horde of zombies.

19.) Cornered and no way out, the group of friends decide to stand their ground and fight off the incoming zombies. A homage to Zack Snyder’s 300 (2007).

20.) Just when things were about to be hopeless for the group, the school’s church door opens and the group is saved by PJ’s father and Bebeth. – A subliminal message of God opening his doors to those who couldn’t kill their demons.

21.) The truth comes out. The group finds out about Gelo’s solo plan to escape with a military helicopter. The group becomes furious after finding out that Gelo only requested for an evacuation for two, which was suppose to be for him and Vanessa. Bebeth volunteers Ruby to be saved for the last spot in the helicopter. But the rest of the group pushes on with the plan to continue going to the roof-top, regardless to whether they would all be accommodated in the rescue.

22.) As the group cautiously make their way to the roof-top, they encounter a horde of zombies at their route. Ruby sees her deceased mother among the undead and tries to run towards her. She is immediately killed by the large group of zombies. A homage to The Walking Dead (Season 6 Ep.9 Sam’s death). 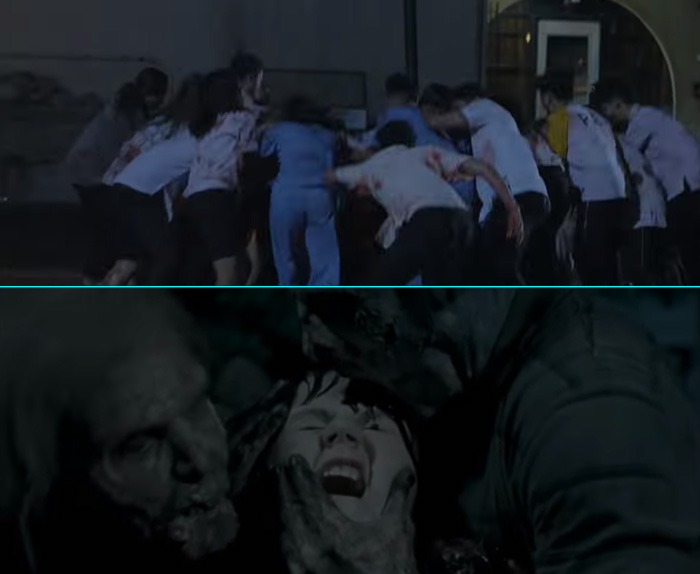 Infused with motherly instincts, Bebeth tries to save her but it was too late.

“Gelo!… Putang ina mo!…” – They shout at Gelo when he seizes the opportunity to lock the group at the area with the zombies as he makes his own escape.

23.) The group successfully escape and was able to find a room to hide and rest. Mario sees a guitar and uplifts the group by singing a song for them. A homage to The Walking Dead (Season 3 Ep. 11 Beth Greene sings ‘Hold On’)

24.) Mario is bitten by a zombie. The group makes the hard decision to lock him in a closet before he turns. They leave him behind to continue their way to the roof-top for the helicopter rescue.

25.) Myles is attacked and bitten by a zombie right after he explained his theory that the zombies could probably be repelled by water. Since the symptoms of the infected were similar to rabies patients, then Hydrophobia (fear of water) could also manifest with them.

26.) When it was only PJ and Lucas that was left, Lucas helps PJ reach the higher ground which was also the helicopter pad at the roof-top. As the zombies were closing in, Lucas bids his farewell but assures PJ about his promise to her earlier that he won’t die. He lets himself be chased by the zombies and jumps off the building. A homage to James Cameron’s Titanic (1998) 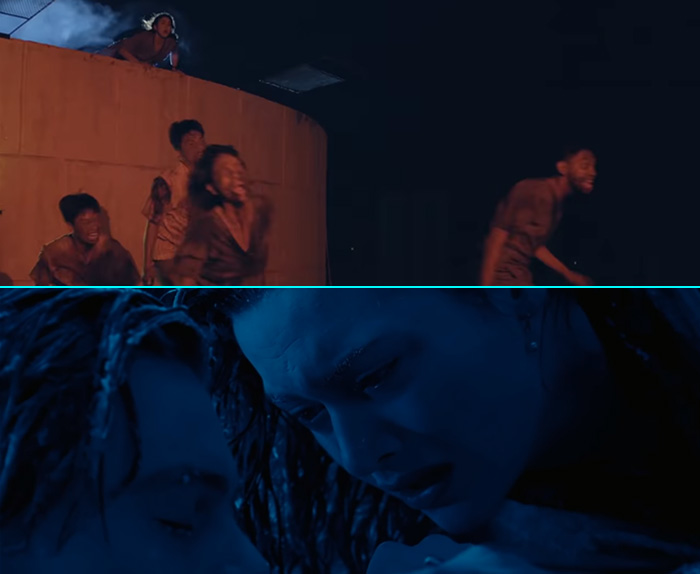 27.) As the morning comes, past 6:00 am, the helicopter rescue never arrived. PJ is seen with a bite mark on her hand. She’s been bitten but she never turned into a zombie. She realizes that she’s genetically immune to the virus. She uses her will to fight her way back to where the group left her father to see if he’s still alive. She battles her way through a corridor full zombies with an axe and her fierceness.  A homage to Park Chan-wook’s Old Boy (2003).

28.) After finding out the Mario is still alive and seems to be immune with the virus, PJ and Mario makes their final escape through a secret  underground tunnel back at the school’s church.

PJ and Mario is horribly surprised as they run into Gelo. He look bitten and is about to turn into a zombie. He’s angered by the fact that he wouldn’t survive the ordeal and tries to attack both PJ and Mario before being mauled by numerous zombies.

29.) PJ and Mario successfully makes it out of the tunnel only to witness the harsh reality that the city has fallen over night. PJ grabs an M16 rifle knowing that their problems are far from over. A homage Paul W. S. Anderson’s Resident Evil (2002) and Neil Druckmann’s The Last of Us , a 2013 action-adventure survival horror video game. 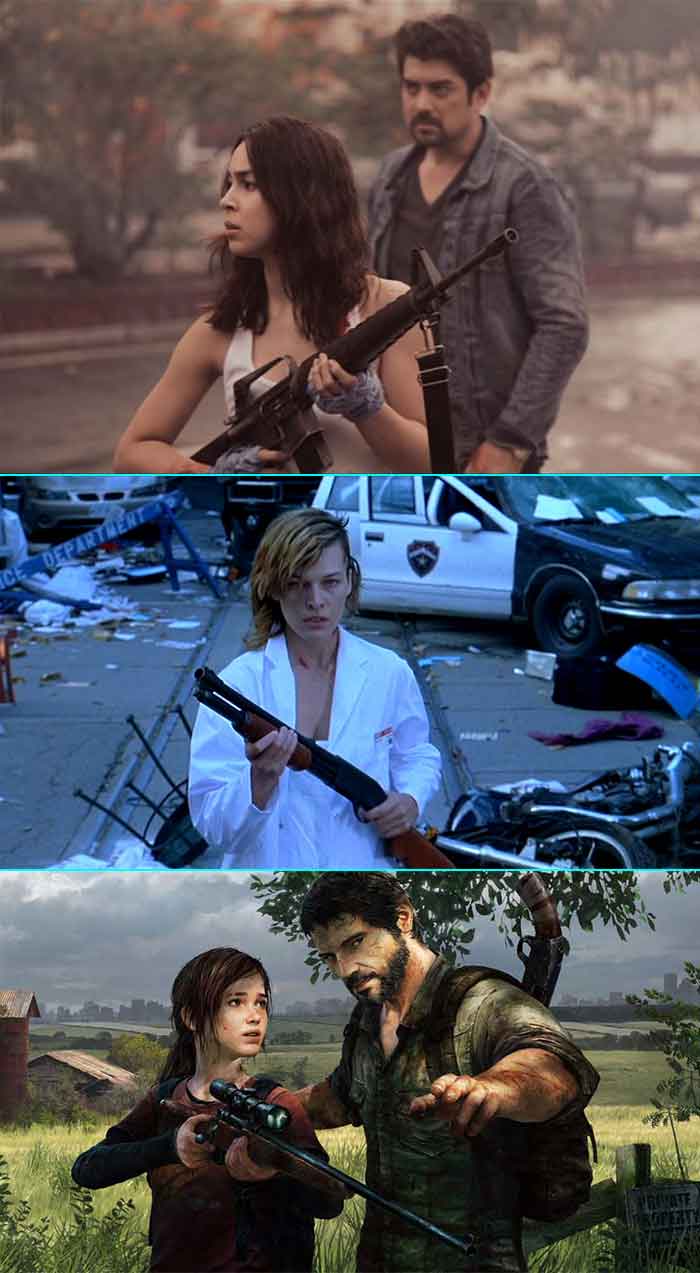 30.) 2 weeks later – As the virus continues to spread and a typhoon is now also wreaking havoc, Lucas is found alive but weak by a group of armed men. Lead by, none other than, celebrity volunteer relief worker Angel Locsin (pun intended).

** Images used in this article are screenshots from official trailers, promos, and other publicized media.