By far, this is the best LizQuen movie that has ever been produced. Both Liza Soberano and Enrique Gil have maturely evolved in their profession as actors and their movie Alone/Together proves it. Super kilig and super worth it to watch! This is definitely a film both Liza and Enrique will be remembered for.

The movie tells of a story of two young lover’s relationship that has been postponed by life’s unpredictable mishaps. They meet again years later and find ways on how to rekindle the past they have lost. It’s a common romance trope in the Filipino film industry but it’s still delivered quite well and fresh by the whole production team.

It also takes its audience to the world of Filipino arts and culture. From Juan Luna’s Spoliarium to Eraserhead’s Spoliarium, it gives importance and value to Philippine history and talents. It also explores the minds and emotions of young idealists who are caught up in the world’s unfair and worrisome realities.

Liza Soberano is definitely the “It Girl” of fashionistas in the Philippines. Her fashion statement in this film is absolutely remarkable. A very classy statement, that is. On one event that she attended, she is seen wearing a beige Filipiniana and she’s the most beautiful lady that I’ve ever seen in my entire life in it.

Enrique Gil’s character should be the poster boy for every hopeful suitor. He has this aura of a young man who has taken the courage to lead his life to whom he loves. He has of course played this sort of role in almost all of his past roles, but nevertheless, he has become better in it and more admirable.

If you haven’t seen this yet, well you should by Valentine’s Day. It’s the perfect movie date thanks to Antoinett Jadaone as its writer and director.

In an awkward first-time meeting at the National Museum of Fine Arts in Manila, university students Christine (Liza Soberano) and Raf (Enrique Gill), both had a casual argument about the spelling Eraserhead’s popular song “Spoliarium”. Raf being the victor of the argument and wanting to prove his point, he gives Christine a copy of Eraserhead’s album and Christine soon picks the song as her favorite. Both became closer to each other and fall in love. Christine shows her idealistic side of wanting to change the world and having dreams of studying abroad in prestigious art schools while Raf is a happy-go-lucky guy who is not so sure yet of what to do with his life.

The movie fast-forwards years into the future where it’s found out that both are no longer together and have different relationships of their own. Christine is dating a rich businessman (Luis Alandy as Greg) and Raf is with a fellow doctor (Jasmin Curtis as Aly). Their relationship had a falling out when Christine was framed for employee theft and Raf not being able to graduate from his studies on time. Even during their stressful situation, Raf asks Christine to marry him but she declines and decides to end their relationship.

Eventually, they still became friends after years of not seeing each other and would meet secretly from time to time only as friends whenever they would feel alone. One day, Christine had the opportunity to go to New York regarding a business trip of Greg’s company. Raf convinces her to stay longer in New York than her allotted time for work so she could visit the Metropolitan Museum of Art (MET for short) since it has always been her dream to visit it since she was young.

In New York, Christine is happily surprised by the arrival of Raf and the two explored the museums of the city particularly the MET. Both enjoyed their time together and rekindled their past relationship for a short period of time but Christine insists that they should once again end it since they have different lives now and that they are not the same persons when they were in college. Raf rebuts this and tells Christine that he has broken up with Aly and tries to propose to her again with the same ring he had on his first attempt. She still declines and both soon head back home to the Philippines.

Christine realizes that her relationship with Greg wasn’t making her happy since she’s only with him out of necessity. Greg also insults her dreams which lead to an argument that causes their break-up. Christine then tries to get back with Raf but finds out that Aly is pregnant with his baby.

As Christine is no longer burdened with servitude towards Greg, she takes the opportunity to look for a job at art museums or galleries as an archiver to follow her dreams. She lands a job for an art organization and soon goes to Raf to tell him that she’s sorry and how much she still loves him. But Raf no longer feels the same way and now plans to take his role as a future father to the best of his abilities.

The movie ends with Christine and Raf meeting again at the National Museum in front of Juan Luna’s Spoliarium. Raf is carrying his baby and showing it to Christine. Both seem happy and proud of each other.

1.) Christine works as a part-time archiver/docent at the National Museum in Manila where she met another studen, Raf, after an argument about Eraserhead’s song.

2.) The Eraserheads album Raf gave to Christine to prove his point in their recent argument about “Spoliarium”. Years later, Aisha (Greg’s daughter) asks Christine what song is it when she played it on Spotify, she answered “my favorite song.”

3.) Christine, an idealistic and bright Arts student, tells Raf “Gusto kong baguhin ang mundo“. They both form a special bond by the bench of UP Diliman’s grass fields. When asked if he believed that the world can change, Raf replies “Sayo bilib ako, sa mundo hindi.”

4.) Alone/Together has a theme of heritage and celebrates Filipino culture.

5.) Christine is deeply stressed after finding out she was framed by her boss on a theft charge against the company she was working for. It became evident that she knew her boss was stealing funds from the company but she turned a blind eye on it until her name was dragged into it. She decides to end their relationship and declines Raf’s proposal for marriage.

7.) Christine notices that Raf has a new lover who is also a doctor.

8.) Christine and Raf secretly meet each other at their special place in UP Diliman

9.) Raf surprises Christine in New York “Kita tayo sa steps ng MET”. When Christine asks why he’s there he responds “Malakas ka sakin eh”. This is also where they met a fellow Filipino artist named Alex Castro, a painter who came to America in search of a better life as a car dealer.

10.) Both took a deeper look into their lives and realized they had many “what if’s”. Raf convinces Christine to have fun with him while they’re still in New York together saying “Ito na ang what if natin. So let me hold your hand and let us be the lovers we’re suppose to be.”

11.) Raf tries to convince her that she’s not happy with Greg. He proposes again to her but she still declines. 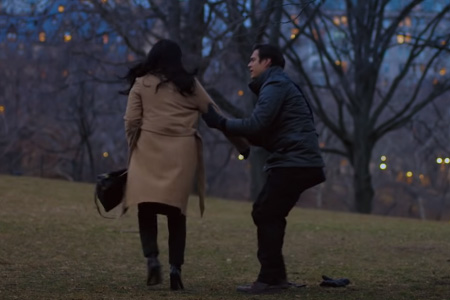 12.) “You saved me, I served you” – Back in Manila, Christine realizes that Greg doesn’t really give any importance to what she wants in life. He is mostly only interested with his business and is condescending to her. They finally break up and Christine soon starts her new life by looking for a job at any art galleries.

14.) “Instead of museums, malls now stand as the de facto cultural center” – Christine speaks in an art forum giving us an idea on how malls have become more popular than traditional cultural centers like museums, and how malls are able to reach out and do their part in promoting our heritage.

16.) “Although art is always seen as self-expression, it should always serve the people I belong to” – Alex Castro’s statement when she returned to the Philippines because of Christine’s influence.

17.) Best of both worlds. Raf surprised Christine at the steps of MET in New York, and surprised her again at the steps of the National Museum of Fine Arts in Manila before the ending. And they said the same thing to each other as before.

18.) A common love story formula in the Filipino showbiz industry –