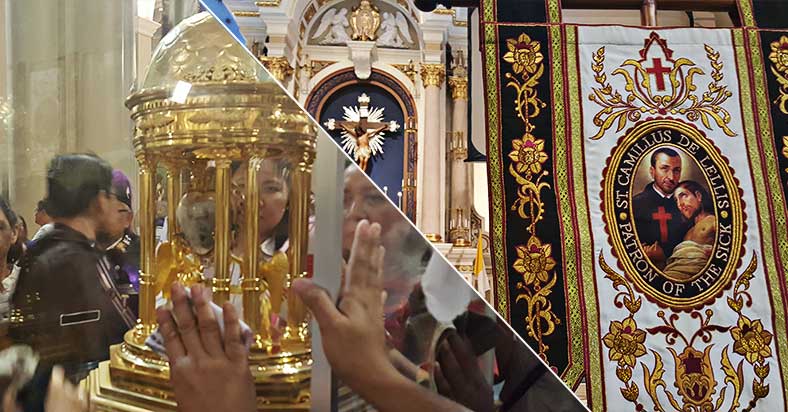 Catholicism is predominant in the Philippines and patronage to the saints is very common and often traditional. Last year, Filipino faithfuls were gleamed upon the arrival of St. Padre Pio’s heart relic in the country, and now are just as gleeful with the arrival of the incorruptible heart relic of St. Camillus.

Who is St. Camillus?

Camillus de Lellis was born on May 25, 1550 in Bucchianico (now Abruzzo in Italy). At a young age, he was known to have had his father’s stubborn temper and was easily angered with petty matters. His mother died when he was about 12 years old and ended up being raised by relatives where he often felt neglected. With his good height and body-build, he took the opportunity to join his father in the Venetian army at age 16 and was later sent to war against the Turks.

Years later, his regiment was disbanded. Considering he came from a wealthy family, he took his early inheritance for granted. He lived a viceful life of drinking, fighting, womanizing, and especially gambling. At that time, he was 25 and was already deeply addicted to gambling to the point of even losing his last pair of shoes to a bet. With nothing left from his money and possessions, he took odd and laborious jobs at a Capuchin friary in Manfredonia. He later had a spiritual and religious awakening and tried to enter the novitiate of the Capuchin Order but his admission was denied due to a leg injury he got from his previous military service that physicians declared as incurable.

He then moved to Rome where he entered San Giacomo Hospital, a hospital that served people who had incurable diseases for free. From there, he once again worked on laborious and odd jobs for the hospital. He became a caregiver. His observations made him aware of how poorly the patients were being assisted by the staffs and how often they were neglected by their families. By the time he became the hospital’s superintendent, he managed the hospital and made sure it was clean and dignified for the patients. He trained new staffs and provided proper and humane care for the sick, especially to those who were about to die.

Camillus saw the vulnerability of the patients as the most unwanted in society. Often, this lead to the depression and lonely deaths of the patients. It was because of this that he seek to establish a Holy Order of pious men who will be in care for them with sincere and loving effort in line with their faith. He was later given the approval for the endeavor by Philip Neri, a local priest and Camillus’s spiritual director and confessor who also became a saint. Camillus was able to finish his seminary studies with the help of a wealthy donor, which was necessary for the order. He was ordained as a priest on Pentecost on 1584.

The Holy Order that St. Camillus founded was Order of Clerks Regular, Ministers of the Infirm (aka Camillians). They wore black cassocks (later became white) with a red Christian cross on the chest as their badge. They cared for the elderly, for orphans, and for many types of indigents. They were also often sent by the Pope to war zones to help wounded soldiers from the battlefield. The community of the Camillians grew out of necessity from the time it was established and created a system of health workers both ordained and not. The Camillians’s red cross on their chests became a symbol of charity and sincere service especially in times of war. This was hundreds of years before the International Committee of the Red Cross was established.

Many would argue that it was this Holy Order that revolutionized the healthcare system of Europe, and eventually the whole world. By humanizing the sick and dying, providing dignified care, and recognizing the patients basic needs and rights. This became the benchmark of modern and global health organizations.

Influence of St. Camillus to the Filipinos

Besides being the patron saint of the sick and health workers, many charitable organizations are also attributed to him in the Philippines.

United Doctors of St. Camillus de Lellis Hospital is a hospital founded by doctors and a pharmacist which had a vision of providing modern and state of the art facilities for almost all medical needs of the people in Batangas City and neighboring towns.

St. Camillus College of Manaoag Foundation, supervised by the Camillian Family Foundation Philippines, was a day care center that served the poor children of the community now has become a full-fledged college with curricular offerings from pre-elementary to college level. It is in Manaoag, Pangasinsan.

Camillians in the Drug War of the Philippines

When President Rodrigo Duterte assumed office on June 30, 2016, a full implementation of the country’s Drug War was taken into effect to combat an epidemic addiction to illegal drugs and to put a stop on the high drug related crimes and drug syndicates. According to official police reports, the war has killed of over 5, 000 alleged criminals and made over 167,100 drug related arrests. The drug war in the Philippines is a popular war but many has stated their concerns that it has fast become a “war on the poor” which has also taken the lives of over 90 police officers and hundreds more wounded.

The Catholics’ Bishop Conference in the Philippines firmly condemns the many controversies, methods, and alleged “extra-judicial killings” which the war on drugs has tolled. To which the church has devised it’s own action plan to help in a humane way by rehabilitating drug addicts. Many organizations under the church has stepped forward to be part of this program including the Camillians offering a variety of services for health promotion, medical and surgical, psycho-spiritual and social services through the collaborative partnerships with government and non-government agencies.

Using St. Camillus as their model, Filipino Camillians value the opportunity of life conversion and see drug addiction as an economic, moral, and health issue that needs to be addressed inline with humane principles.