“Pray, hope, and don’t worry.” – these five short words from St. Padre Pio are full of wisdom and has gotten me through some tough times in my life.  His teachings has been a huge influence in my life. That’s why I knew I couldn’t miss this chance to see his incorrupt heart relic once I heard months ago that it will be brought here in Manila, Philippines.

As Catholics and in how we understand the Biblical scriptures, we believe in something called “the communion of saints”. In simple terms, it is the fellowship of living Christians and of those Christians who have already passed away. A unity that we have in the mystical body of Christ (the church) where Jesus himself is the head and in which each member contributes to the good of all and shares in the welfare of all. This is of course a broad theological topic and I’m not the best person to teach this, but what I’m trying to say is that our fellows who have passed away are still alive (perhaps even more alive than us on earth) and their prayers and assistance matters a lot to us. And one particular fellow Christian that we Catholics are familiar of is Saint Padre Pio.

Who is Saint Padre Pio?

Padre Pio, also known as Saint Pio of Pietrelcina, was a friar, priest, stigmatist, and mystic, now venerated as a saint of the Catholic church. 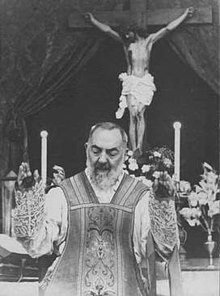 He is famous for the stigmata that he has experienced which has baffled doctors and other experts. Many miracles and mystical occurrences were also attributed to him by the people who met him and by those who has sought his intersession through prayers.

Saints like Padre Pio are not worshiped the way Catholics worship Christ, but rather are venerated and honored. The devotees believe that they play an important role in God’s plans for his people. It is also believed that sainthood is the calling of the people of Christ.

Incorruptibility is a Roman Catholic and Eastern Orthodox belief that divine intervention allows some human bodies (specifically saints and beati) to avoid the normal process of decomposition after death as a sign of their holiness.

The body of St. Pio was exhumed from his crypt forty years after his death. In a church statement, his body was described to be in “fair condition”.

His heart, of which is now a relic, was recently brought to the Philippines for the first time. It arrived in Manila on Tuesday morning, October 9, and will remain in display for 24 hours each day until October 11 in the morning.

Anthony Bourdain, The Filipinos Will Miss You. Rest In Peace