Jason Dhakal is in a bad spotlight after netizens describe his tweets against Michael Pacquiao as “utak-talangka” (crab mentality). The latter has recently emerged in the music industry with plenty of support from fans but Dhakal’s bitter-toned comments seems to strongly oppose Pacquiao’s rise.

But first, who is Jason Dhakal anyways? Well, he’s a Filipino R&B artist still in his way to stardom. He uses different social media platforms to showcase his music and has garnered about less that 9,000 followers in each of his social media accounts and around 3000 subscribers in his Youtube channel.

According to a 2019 interview with Wonder, Jason was once given an opportunity to work with a label company which could have helped him navigate his ways through the Philippine music industry. But believing that his craft might get compromised if he subjects himself to a company, he decided to turn them down and pursue success by himself, saying that he’s confident that he knows what he’s doing.

Unfortunately, things haven’t been working out quite well for him. The already struggling artist has gained bad publicity after lambasting Michael in a tweet, describing a video of him singing a portion of his new single as “shit like this”.

Dhakal’s twitter rants voices out his frustrations about how privileged people gain more recognition even with mediocre talents than people like him who claims to work “4x harder”.

Although some fans has supported his opinions about the difficulties within the music industry, many are not comfortable about his personal attack towards Pacquiao. Fans have expressed that this rants are stemming from crab-mentality and self-entitlements.

Many have also come to different social media platforms to express their dismay towards Jason. 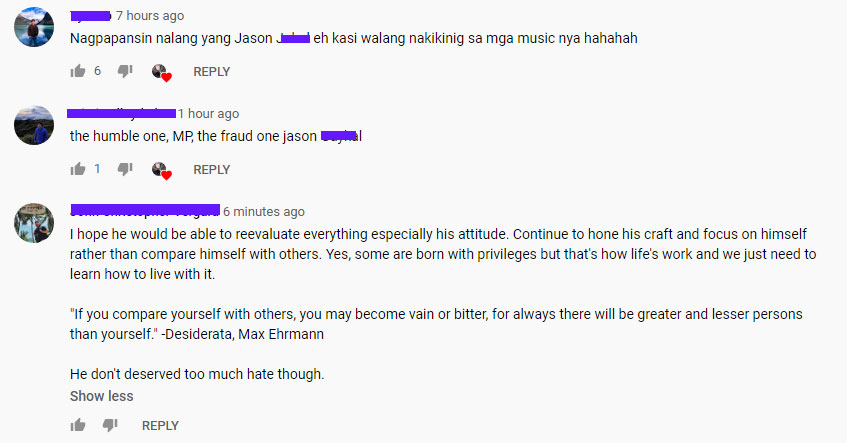 Calling out someone’s privilege: the new attack of the insecure

Calling out somebody for being privileged or rich has become quite mainstream these days.

Is success only for the underprivileged? Absolutely not. Privilege is only wrong when used illegally or to do harm and injustice to others. I don’t think Michael has done anything like that. And let’s face it, if we were all privileged, we’d all use it to our advantage too.

Another thing that people should learn about success: more than working hard, focus on yourself and be humble.

Who decides what’s mediocre and what’s not?

We can all agree that neophyte artists calling other neophyte artists as mediocre is totally uncalled for. Jason Dhakal has now shown something that his Filipino audience hate, pride and prejudice.

Pacquiao’s viral success shouldn’t be shamed or belittled, especially since his song’s message was positive for the youth. His achievement helps the local music industry and opens the possibilities to make it profitable as the foreign counterparts and gives inspiration to aspiring local song writers to start their craft in their homeland. So why pick on him in the first place? Is it because he’s Bisaya? Is it because he’s not classy enough according to the standards of Pinoys who came from abroad like Dhakal?

A the end of the day, it’s the consumers who decides what’s good for them. Big media might have a hand on the flows of competition and attention between artists, but bickering towards each other won’t be helpful too.

Filipinos simply do not want a music industry where artist show hate for each other’s work and strategies.

Why is Michael Pacquiao more successful than Jason Dhakal?

It is easy to understand where Jason’s frustration is coming from. His hard work and music has only been seen a few thousand times but Michael’s work was seen by millions. But hard work isn’t the only measure of success.

Pacquiao’s target audience is the general Filipino youth while while Dhakal’s audience seems to only identify with the LGBT community.  So it’s a no brainer that Michael would get more public recognition.

I also don’t think that Dhakal’s unpopularity can be blamed to the homophobic culture in the Philippines. Because if that’s the case, celebrities like Vice Ganda wouldn’t have a chance in Philippine showbiz. It’s all about targeting your audience. If you have a small audience, then you’ll get little attention too.

One thing that Michael has started building for himself that Jason hasn’t is the skill to clout. Because of this, we will soon see Michael’s career skyrocket and Jason will be forgotten before he could ever make a name for himself. If that happens, he can blame it on pride and overconfidence.

This is the “showbiz industry” not “art industry”

There’s a huge difference between showbiz personalities versus art personalities. The general audience are not art enthusiasts but are entertainment lovers. So if you’re an artists who’d like to share his passion and artistic prowess and would like to be famous for it, just be reminded that people long for entertainment and not art. What is art to you, might be boring to many.

This is the reason why people who came from famous families have an edge over newbie celebrities. They may not be as talented or as skilled but they bring in more attention, which makes advertisers happy, which makes more revenue. There is nothing bad about this especially if people are getting the entertainment that they want. For instance, Ivana Alawi may not be a great singer, but nevertheless people would still want to hear her sing because she is quite an entertaining individual.

Sometimes in this industry, it’s not always about talent, it’s also about X factor.

Michael Pacquiao (18 yrs old) is the son of the famed Filipino boxer Manny Pacquiao, whose family also has a known history of being underprivileged due to poverty but is now one of the most loved rags-to-riches personalities. He has recently released his album “Dreams” with the song “Hate” being the most popular. The song inspires about the pursue of ambition while deflecting hate and criticism from others.

His live performance with Wish 107.5 has attracted millions of views.

Prediction: Raffy Tulfo Will Win In The 2022 Senatorial Elections And Here’s 3 Reasons Why

Kim Chiu on 15 Years in Showbiz: “living the prayer that I once thought was impossible”

I Suggest Jannie Alipo-on To Be The Next ‘Darna’