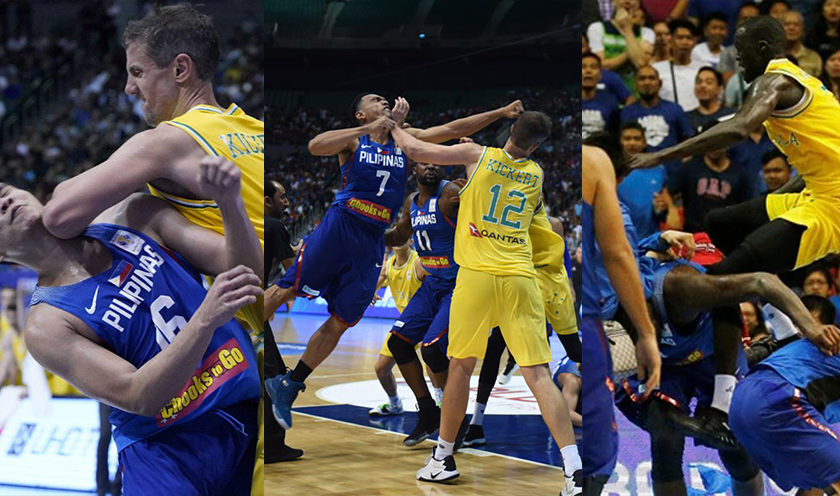 Have you ever been in a rambol? When you see your buddy starts throwing fists at an opponent in the name of “looking out for each other”, chances are, you’re about to join in. Well, that is if you’re a Filipino. Whether the setting is in a local barangay or at an international event with the whole world watching.

When I saw what happened between Gilas Pilipinas and the Australian national team, I though to myself “What happened to the so called Filipino hospitality? What happened to that sort of manners we Filipinos are so proud of?”. But I also kept on watching the replays on the internet with glee on my face. I was surely embarrassed that this happened in front of the whole world to see. But also, deep down inside I enjoyed it. Which ironically adds more to the embarrassment.

Is rambol the new bayanihan for young men these days?

I surely hope not! But sadly, many young men are now engaged in this kind of actions as we’ve seen lately in the news. It’s becoming a real trend and I’m afraid that many more of the Filipino youth might willingly engage themselves in brawls like this as they look up to the men of Gilas Pilipinas. Being in a brawl is not something to be proud of.

Is “looking out for each other” a good alibi?

No it’s not! Especially in sports. It’s the job of the referee to keep an eye on the players. If someone does something violent, that player is penalized or even kicked-off the game. The smart thing to do is just let the referee decide on this matter. So why the hell did our boys from Gilas Pilipinas lose their sh*t like that?

Terrence Romeo made a daring tweet on his thoughts about the brawl:

Though we understand his sentiments as a hard working team player, what we don’t understand is why the hell did the non-players also joined in. Even the guys on the bench just irrationally jumped in, as in sugod! I couldn’t think of a viable excuse other than Filipinos simply love rambol.

When your friend throws a punch, it’s a freaking go signal!

What’s next for Gilas Pilipinas?

What they should do is simply apologize. There’s no harm in apology. Some of the Australian players are also at fault, particularly Daniel Kickert. But we have to admit that our boys lost their control and made a bigger fiasco out of it than it should be.

I hope our team won’t get banned from FIBA. Ball is life in the Philippines! It’s the FIBA World Cup Asian Qualifiers, so hopefully it wont be the Asian Disqualifiers for us.