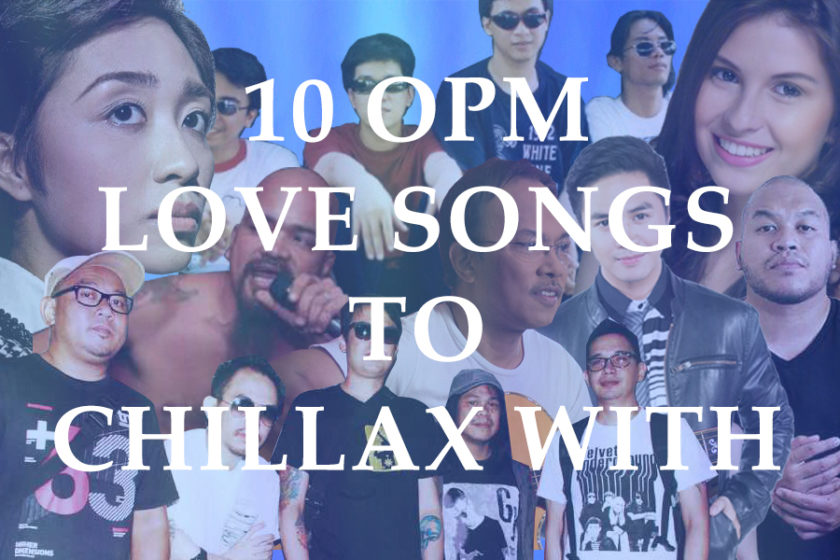 Looking for some good OPM love songs that can satisfy your mood? You also probably have your crush stuck in your mind right now and you can’t focus on what you need to do for the day. So here are some love songs from various Filipino artists you can chillax with!

Have you ever had a special someone whom you can call “the one that got away”? This song is nostalgia about the habits of two persons who were really close during their childhood years. Now that they’ve grown, things have changed and they’re far away from each other. All they have left are their memories of being happy together, being the prince and the princess. They still have that deep affection for each other and the appreciation for their past, but because of the circumstances they’re in, there is this realization that they couldn’t get what they truly want, which is simply being with each other gaya ng dati.

Ah love at first sight. Although not many people would admit it, this actually does happen. Prinsesa is about a man who suddenly has this compulsive rush of love for a certain woman at first sight. The problem was that the woman was already paired to another man, but this doesn’t stop a person from still having this feeling. Thoughts and emotions are hard to control leading the man to day dreaming and sleepless nights. The consequence of love is the heavy urge to treat someone the best way that you can, and in this case he wants to treat her like a princess but this can only happen in his dreams.

Tadhana is a deep song that motivates us to push ourselves and welcome what or who is destined to be ours, to be fearless and be honest towards our very own selves. This is about self love and if you truly love yourself, you wouldn’t let chances handle your own fate. It is painful to never get a hold on what’s rightfully yours all because of the fear of failure or rejection. Don’t allow yourself to lose the treasure that’s right in front of you. You want it? Go get it!

Speaking of taking control of your own fate, here’s a song about a lucky man who want’s to have a girlfriend. Looks like fate brought the girl of his dreams closer to him and all he had to do is spend some time with her. He knows what he wants and he’s true to his feelings. He takes the opportunity to be with her and it’s all easy. Sometimes fate can surprise us even in the most unexpected places, like the zoo.

Here’s a song that has been played numerous times in weddings and anniversaries.  This song was written by Rey Valera and performed by numerous artists and most probably karaoke enthusiasts. It’s simple message is good specially for married couples or for those who are planning to tie the knot. Many things can change all through out our married lives, including how we look, but the message here is to hold on to that love because that would be your ticket to a happy future. A future where you’ve accepted and embraced the realities of life and shared and enjoyed with the best companion. After all, isn’t happiness only real when shared?

Cuddle time, anyone? Sometimes when you’re with someone you really love, you’d wish for it to rain so bad just so you can get stuck at that moment and have an excuse to stay a little bit more longer with each other.

Yes, I know this is a song about friendship, but that’s exactly the reason why I included this in the list of love songs. Who said a husband can’t be friends with his wife? Who said the best relationships doesn’t start with friendship? Aren’t we more open and honest to the people we love when we have a friendlier approach to each other? The message of this song in some way beats the message of other love songs. It reminds us to be grateful to the people who have stayed by our side and say thanks to them. Think about it, it’s one thing to receive the words “I love you” from someone who matters to us, but it’s a whole new level when that person says “thank you”. So don’t forget to give thanks to those who stood next to you, especially to that someone who has been there for better and for worse.

Great things start with friendship. Dumadagundong is a Philpop song that reflects the early stages of admiration.  There will always a be time when you’d get too close to a certain friend and both of you would like to take that chance together. You get that exciting feeling, the type of feeling you know you’re about to gain something important in life, it’s just a question of when and how. It’s so near but it feels so far, waiting for something that’s right in front of you. All it takes is a leap of faith as you feel that deep beat in your heart in every minute of anticipation.

Remember that time when you got rejected but you still have that feeling of hope in your heart? It was hard to walk away from who you really want even though that person doesn’t want you and you’re only left with a bitter feeling of respecting that person’s choice. When you can’t always get what you want, that’s the time you become torete.

When you’ve finally met the right person and you’re ready to give it all you have, Sundo by Imago would probably be the most relatable song for you. It’s a scary feeling to have someone put all their trust on you, but for those who truly loves, this is their source of strength and purpose for commitment.