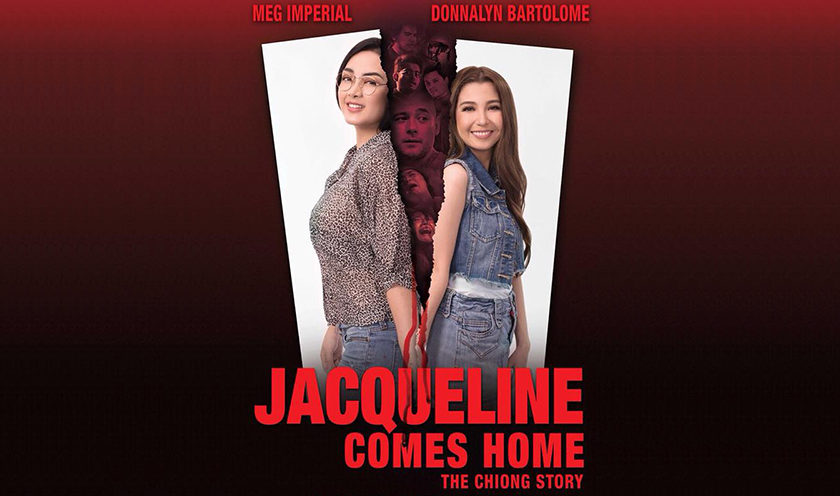 This is a movie that should have never been made. Instead of bringing more light into the already controversial case of the Chiong sisiters, this only brought more public scrutiny against the side of the victim’s family.

There is so much public scrutiny about this controversy right now, but before we dive deeper into that, let’s first discuss the movie itself since this is a “movie review”.

It is bad! Badly directed, badly produced, and bad script writing. There were only a handful of people watching at the cinema. It was so bad that half way through the movie, people actually started walking out. It’s most likely a flop.

I felt like I was watching a teleserye and not a movie. Even the extras failed miserably in just being extras, they were OA. I could say that Meg Imperial (Jacqueline) and Donnalyn Bartolome (Marijoy) did there best in their performance, but I was so disappointed with Joel Torre (Dionisio Chiong, the father). I was really hoping that he, as a veteran actor, would bring out the fire in this film, but I guess the bad script writing and bad directing messed everything up for him. His performance for this film is simply mediocre and it was bad enough that he was often in scenes with other bad actors and flimsy extras. Alma Moreno who played the two sister’s mother, Thelma Chiong, was very uncomfortable to watch in that particular character.

The creators of this film wanted to shed some light to the controversial case of the Chiong sisters. But just like in real life, they did not shed any light at all. There was no believable details on how the accused was investigated and tried in court. As a matter of fact, this movie only showed a short glimpse on how one of the suspects testified against his fellow gang mates because his conscience was eating him up. And then voila! Life sentence for all!

The movie plot mostly focused on the personal experiences and grievances of the victim’s family and their ways of coping up to move forward in life. There was a lot of talk about good and evil and how the movie portrayed Paco, the antagonist, and his gang as sex crazed drug addicts and almost demonic in nature while the Chiongs are portrayed as religious and saintly.

Yup, there are ghosts and paranormal experts in this movie. The movie actually showed the two sisters as restless ghosts and the mother, Thelma Chiong, hiring paranormal occultists to help her communicate to the ghost of Jacqueline.

Summary of the movie

Paco Larrañaga, a Spanish speaking tisoy, is a leader of a gang that often spends their time in alcoholism, drugs, gang rapes, womanizing, and terrorizing other people. He is madly in love with Marijoy Chiong and ends up stalking her. Marijoy starts fearing for her safety and clings to her older and protective sister Jacqueline. Paco tried to make his advances on Marijoy but she rejects him. Paco couldn’t handle the rejection and proceeds with planning a revenge with the help of his gang that would make her feel worse than an animal. The gang was soon able to kidnap both sisters and raped them repeatedly the whole night. After raping them, the gang planned to kill them. The first to be killed was Marijoy who was thrown off a cliff, then Jacqueline who’s body was thrown into the see.

Upon the discovery of Marijoy ‘s body, and Jacqueline still no where to be found, the Chiong family is now in deep trauma and stress. They vow to seek justice for their daughters and would pray very often to God, showing the family’s religious side. Thelma Chiong, the mother, also seeks assistance from paranormal experts.

At the end, police investigators were able to track down the gang and have them convicted of rape and murder. The court’s ruling over their conviction is double life sentence. Thelma was also able to move on by seeing her daughter Jacqueline in the persona of her youngest daughter, Debbie, who also looks like Jacqueline in real life.

Netizen’s reactions towards the film

The netizen’s reactions are mostly negative. The movie was called biased and many called for the boycotting of the film in cinemas. Some netizens even expressed their hopes for reopening the Chiong Sisters case for investigation. The actors and actresses were also subjected to scrutiny and were heckled in social media.

The movie is of course based on the Chiong Sister rape and murder case where 7 accused young men were convicted and imprisoned for life. Many observers of this case has recognized that this was a mistrial and that Francisco Juan “Paco” Larrañaga, who was 19 years old at that time, and together with six other accused, has strong evidence for their innocence and that they were framed and falsely accused in their trial. The main evidence being that on the night of the believed abduction (July 16, 1997) of the two sisters in Cebu, Paco was actually in Manila, which is a city in a separate island of the Philippines. Friends of Paco were quick to defend him with pictures as evidence that they were with him on the night of the said abduction. School records and faculty member’s testimonies also showed Paco was in Manila for an exam and that there were also no records of him boarding any airplane to Cebu on that day according to airport staffs. But these testimonies were dismissed by trial court.

The controversy drew the attention of the Spanish Government since Paco was a dual citizen of Philippines and Spain and was later transferred  to Spain to serve his term there by virtue of Treaty on the Transfer of Sentenced Persons.

The 6 other accused are still serving life sentences in the Philippines and Paco serving his in Spain.