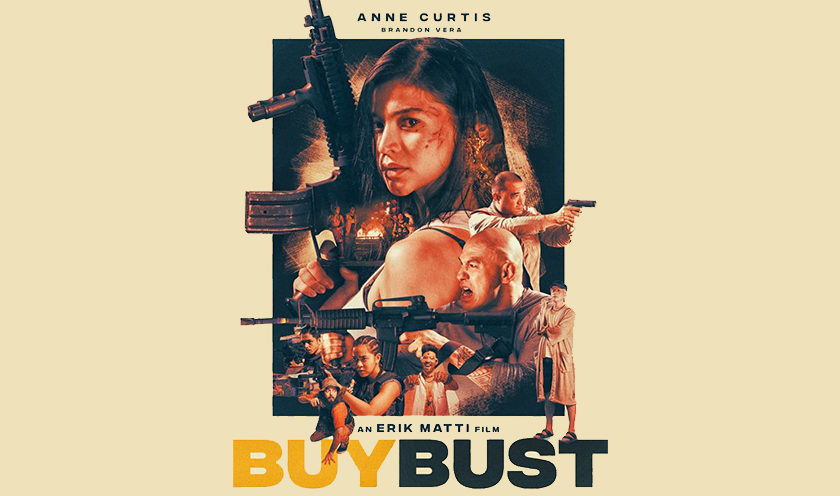 Watch it! Watch it! Watch it! I must also warn you that this is a violent movie. A high-energy violent action movie that is. No Robin Padilla movie can compare to it. In my opinion, this has set the bar high for future action-thriller films and has put to shame the old ones.

The ending of this movie is absolutely iconic and relevant to today’s society. This film opens the minds of its audience for critical opinions about poverty, crime, law enforcement, and politics in the Philippines.

Given the volume of action in the story, almost war-like, it’s of course unrealistic. But nevertheless, the story is an epic one and very gripping. It beats any Filipino action movie that I know of.

What’s realistic is their handling of their weapons and self defense techniques which the cast trained for. And finally, an action movie where it’s realistically depicted that people have to change magazines and can even run out of ammunition in gun fights. Unlike in the old Pinoy action films where everyone has unli bala and doing unli ratratan.

BuyBust also had an amazing “no cut” scene of Anne Curtis fighting through a nasty gun and hand-to-hand combat with multiple opponents.

Police woman Nina Manigan (Anne Curtis) joins her new anti-narcotics unit after a traumatizing event where all of her teammates in a previous unit died in a doomed operation.

Her assignment in her new unit is a “buy-bust” entrapment operation, where their asset Teban (Alex Calleja) will conduct a transaction with a drug kingpin known as Biggie Chen (Arjo Atayde), while the unit overlooks the entrapment in public while in disguise as civilians.

While waiting for Biggie in the entrapment location, Teban receives a phone call from Biggie insisting that the transaction should be relocated to a different place as he is having doubts against Teban’s real motives. Biggie insists that the transaction be moved to Gracia Ni Maria, a huge slum compound where the alleyways are too narrow and gang related crimes are rampant. Detective Dela Cruz (Lao Rodriguez), also the head of the unit’s operation, decides to follow through on Biggie’s request because he did not want to waste the opportunity of arresting Biggie.

Before arriving to Gracia Ni Maria, the unit devices a new plan of splitting into two squads. The first squad serves as the arresting and assault squad led by Team Leader Bernie Lacson (Victor Neri), which includes Nina and Rico Yatco (Brandon Vera). The second squad is the entrapping squad led by Detective Dela Cruz who will be in disguise as Teban’s bodyguard. Detective Dela Cruz’s plan for back up from other police units will be an “in the moment” notice if things become too dangerous. This plan is later proven to be faulty as there is no signal in that area due to signal jammers used by the gangs.

Lacson’s squad finds Dela Cruz slipping through the alleyways unhurt. Nina becomes suspicious of Dela Cruz ‘s motives and theorizes that this was all a set up by him. They try to rally back with the other squad but they soon discover that they’ve all died died except for their asset Teban who was pretending to be dead amidst the corpses of their dead teammates. They put handcuffs on Dela Cruz as their suspicion grew stronger against him.

Their fight for survival and escape continues as they are now being hunted by a larger crowd of gangs and civilians who are angry towards the police. Unable to call for backup, Lacson’s squad soon find themselves outnumbered. They get wounded in the gunfights and run low on ammunition and later on are violently killed one by one.

Teban, Nina, Rico, and Dela Cruz are the ones who are left alive and able to hide temporarily. Teban and Nina was able to make Dela Cruz confess about his true intentions and Nina kills him out of anger. Nina believed it was the right thing to do but Rico insists that what she did was wrong and that she’s not “the law” to make such decisions. As the chaos continues, Rico and Teban were also killed leaving Nina on her own and unconscious from a fall.

When the violence finally subsided, Nina was able to gain consciousness and slip through the alleyways. She’s able to hunt down and kill Chongki and discovers Biggie’s den in the process. She finally has Biggie at gun point. But after a critical conversation with him, she finds out the hard truth that he is actually being protected by her unit’s head officer, Detective Alvarez (Nonie Buencamino). She also finds out that their back up was actually waiting outside Gracia Ni Maria all along and Detective Alvarez was just waiting for Biggie to escape the compound before he follow up with an assault. Biggie tells Nina that he isn’t even the biggest fish of all. That drug syndication and law enforcement by the police against drug criminals are both businesses. The gangs sell drugs to earn while the police earns through “incentives” or “arrest quotas”, and they do so by improper or false arrests. Biggie also makes a good point that if the police are really serious about the war on drugs and putting a stop on crime syndicates, then they should have stopped them a long time ago since they actually know where they’re hiding.

Nina was able to arrest Biggie and brought him out of Gracia Ni Maria. She hands him over to a pretentious Detective Alvarez, congratulating her for a good job without a hint that she already knows the truth about him. Instead of giving Nina immediate treatment for her wounds, she is first taken to a police patrol van where Biggie is guarded by two other policemen. Detective Alvarez is on a phone call where he’s seen nervously reassuring the other person on the line that he will not be included in this mess and that all will be taken cared of by him. After the call he joins Biggie and Nina in the van and immediately pulls out a gun and kills Biggie. He then points the gun at Nina but she was able to grab his gun and kill him including the other cops who were on guard. When the other cops came and ask her what happened, she replied “nanlaban yung suspek” (“the suspect fought back”).

BuyBust is directed and co-written by Erik Matti. Who would have known that Anne Curtis, who usually plays girly roles in movies, would be able to put on a character meant for extreme action? Brandon Vera, a professional mixed martial artist with a championship record, was also great in his character. Both are Filipinos with foreign blood and looks. Their minimal dialogues in their script was actually helpful in hiding their accents and made them more suited for their rugged characters. Arjo Atayde, an actor finally getting more spotlight for his talents as he deserves. Victor Neri’s appeal was perfect for his role. Nonie Buencamino had a short scenes but his death scene was really iconic in this movie and Levi Ignacio was absolutely powerful with his diabolically “no conscience” character.

Anne Curtis and other cast members underwent extensive training for BuyBust with the Philippine Army for hand-to-hand combat, knife fighting, and firearms.

Social Significance of the movie and cultural reference

The movie of course mirrors the current war against drugs in the Philippines. The movie suggests that the poor and vulnerable are always the subject of injustice and evil motives of all sides of the war.

The volume of casualties in the movie is parallel to the number of deaths in the drug war of the Philippines, which has reached 3,987 “drug suspects” from July 2016 to January 2018 according to PNP official records. Human Rights Watch claims 12,000 deaths as of January 2018 and government opposition claims it has reached over 20,000. The poor are usually the subjects of drug related arrests, deaths, and victims of alleged extra judicial killings or homicides as seen in the news. The movie ends when Nina tells the other cops that the suspect fought back or “nanlaban” which is a usual alibi of policemen on alleged extra judicial killings in real-life.

BuyBust also depicts the harsh situations police officers face on a regular basis on conducting legitimate operations. Their lives are always on the line and good officers face the stress of dealing with corrupt colleagues.