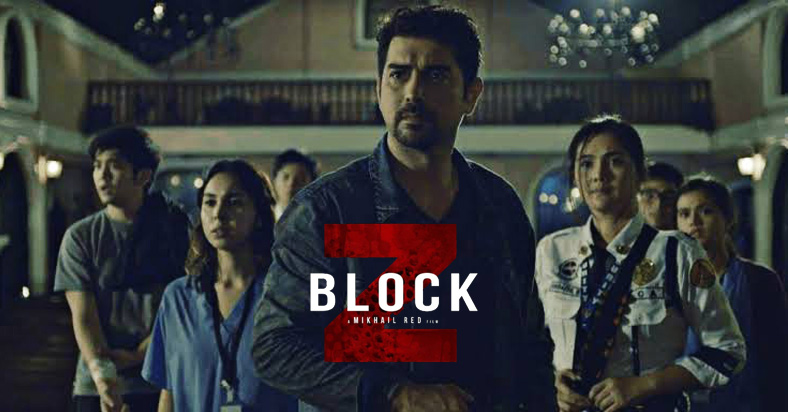 Block Z is Mikhail Red’s most ambitious horror project yet. It is said to be the first “large scale” zombie movie in the Philippines given its proper budgeting for the genre.

The movie in many ways is predictable. In the sense that all zombie movies are based on survival. So we can expect that there would be a lot of running, hiding, panicking, shooting, etc.

But a few things that makes this a bit more interesting is the movie’s ability to penetrate the mindset of the younger audience and sheds light on some modern day concerns regarding the stability of our society and civil structures.

I personally don’t like it when movies tend to be political unless it’s a political movie. It somehow ruins the vibes. But Block Z does it in a subliminal manner where it somehow works just fine.

Never use the “Z” word

It’s common in zombie films to never use the word “zombie” in their scripts. Block Z stick to this rule an uses “like that” and “kalaban” to describe the undead.

With the recent events regarding the 2019-nCov virus outbreak from China, Block Z stands out as a film for this year. The movie reminds us of how vulnerable we are in case of an epidemic which makes the scenes from the movie scarier to imagine in real life.

Finally!!! Some cool fight scenes. The movie industry has been plagued with hugot movies or rom-coms for years now that Julia Barretto made me drool with her moves. I mean, who doesn’t love a chick who can kick ass? If rom-coms has gandang hindi inaakala, Julia has angas na hindi inaakala.

The boldness in the scenes is what makes me interested with Mikhail Red’s works. I know that there are plenty of references and adaptations in his work, but seeing stuff like this makes me realize that the movie industry in the Philippines is moving to a great direction of creativity and potential.

Dimples Romana was also admirable in her character as the school’s shot gun wielding guard. A down to earth lovable character.

As for Ian Veneracion, I was expecting more fierceness from his character considering he was literally the tallest guy in the whole movie and a known action star. So the movie fails to explore that role. If ever there’s a sequel, give that man a machine gun! And make him punch some faces too!

For an in-depth review of Block Z, check out our scene breakdowns!

In an interview with Gretchen Ho, Mikhail Red shares his interests in using big Hollywood movies as inspirations for making Block Z and concocts these references into something that Filipino audiences can relate and digest. Block Z pays homages to horror films like Resident Evil and Dawn of the Dead.

The old “mayaman vs mahirap” trope

Block Z has a character named Gelo, a student leader who is also a son of a general. The movie depicts him as someone selfish and out to save only himself in a time of crisis. He doesn’t use his position of privilege to help others but only reserves his resources.

Gelo’s character implies a deeper message about the rich and the poor’s divide in our country. Where the rich and powerful only looks after their own interest at the expense of the poor. This is the old “mayaman vs mahirap” trope that is very common in local shows. Although it’s undeniable that this is happening in our society, I think this trope has been used quite a lot in Filipino shows for a long time now that it has pretty much molded the people’s general perspective towards the rich.

It’s like, this sort of programming where the rich is demonized in shows has also deeply corrupted and misinform the minds of the people. It kinda bothers me because the audience of this movie are more targeted to younger viewers and I’m afraid they might pick up the wrong message.

I don’t know about you guys, but for me, demonizing a group or class of people in our society only makes them distance themselves further from the rest. Thus, creating a bigger divide and an “us versus them” mentality. And as this cycle of hate goes on, we are unaware that there are people who’ll take advantage of these sentiments like those so-called “para sa mahirap” politicians.

But putting aside these thoughts, yes, Gelo was a world class a-hole in this movie. I guess zombie movies are far more interesting if there’s a self-centered a-hole in the group who creates more problems than solutions.

PJ (Julia Barretto), a graduating med student at the San Lazaro University is trapped in her school when an a zombie outbreak occurs at the school’s hospital. Things quickly became out of hand as the outbreak, which comes from an unknown virus with a rabies like symptoms, overruns the whole campus and a military lock down is established. Students who try to escape are immediately shot and killed because of the rising tensions of the situation.

PJ together with her friends form her Block Z student group devices an escape plan to reach the school’s roof-top where they will be rescued by a military helicopter at 5:00 am in the morning which will be sent by Gelo’s father, a general. But unknown to the group, Gelo only plans to save himself.

Evading and fighting off hordes of the undead as they make their way to the roof, the group stumbles upon PJ’s father Mario (Ian Veneracion), the school’s lady guard Bebeth (Dimples Romana), and an orphan Ruby. They stay at the schools chapel for refuge while Gelo’s selfish plan is exposed.

After realizing that Gelo and only one other person can be taken by the helicopter, the group still decides to push on to the roof-top in hopes that all of them would be rescued.

While the group is distracted with Ruby’s death, Gelo seizes the opportunity to lock the rest of the group in an open area where they’re vulnerable to the zombies. He makes a run for it to save himself.

The group tries to find other routes to the rescue point but started to get casualties as they get infected with zombie bites. Mario becomes a casualty and the group decides to lock him in a cabinet before he could turn into one. In a heartfelt farewell, PJ and the group leaves him behind to continue with their escape before 5:00 AM.

One by one, the group’s casualty rises and soon only PJ and Lucas are left. They make it to the roof top but only PJ makes it to the helipad alive where the rescue is suppose to take place.

Morning came, past 6 AM, but no rescue arrived. It is revealed that PJ is also bitten but she never showed any symptoms or signs of turning into a zombie. She realizes that she is genetically immune to the virus and decides to go back to the room where she left her father locked in a cabinet.

On her way back, she confidently fights off the zombies until she’s reunited with Mario. He’s still alive and is also immune to the virus. They make one last attempt for an escape through an underground tunnel that leads far outside of the campus. After successfully making it out alive, they are greeted with a grim reality that the outbreak has wreaked havoc in the nation’s capital and order has deteriorated. They are once again left to fend for themselves.

2 Weeks later – Lucas is discovered to be alive. Weak and possibly injured from his fall from when he jumped off the building to save PJ. He is rescued by a group of armed men who aren’t from the military. A sign that people have taken matters into their own hands.

For an in-depth review of Block Z, check out our scene breakdowns!

The movie ended well with a good cliffhanger that has potential for a sequel. I’d like to know what happened to Bebeth and what transpired in those two weeks. Like, was the entire city locked down or is this a nation wide problem? What’s the international community’s response? Is there a bigger military solution? Will they find out the true origin of the outbreak?

One thing is now guaranteed, Block Z has set the standard for future zombie movies in the Philippines.