In the 21st century, we have enjoyed and taken for granted the wonders of the Internet. It’s easy to access, easy to connect with other people, and it’s a whole lot of fun. It has many uses and we have come to an era where it is actually considered as an essential in our daily lives. Unfortunately, criminals have also used this powerful tool in doing illegal activities. But not just criminals… Ordinary people like you have also contributed to the many dangers and hazards commonly circulating the world wide web.

The Philippines has Republic Act no. 10175, also known as “Cybercrime Prevention Act of 2012” which defines the types of cybercrimes  in the Philippine cyberspace.

Here are some offenses that are so common, you might have already done these and should avoid doing again:

If you are in a long distance relationship or perhaps just not physically present with your lover, chances are you might try to be intimate with each other in the most possible way that you can. You might be tempted to show your sexual organs or show lascivious exhibitions to your partner through the ease of internet communications. Be mindful that even if both you and your partner are willing and has given consent to each other, this is still illegal.

Also, most web based communication software like Skype or Messenger, has policies against their platform being used for any types of sexually malicious activities. Even though they guarantee your privacy in most cases, they still comply with the laws, especially international laws, and do not want their business to be affiliated with crimes pertaining to sexual acts or trafficking.

you can end up in jail. Just because you did not create it doesn’t mean you can posses it.

Republic Act No. 9995 or “Anti-Photo and Video Voyeurism Act of 2009” protects persons from being filmed without their knowledge in nudity or while engaged in sexual acts.

The Philippines also has Republic Act No. 9775 or “Anti-Child Pornography Act of 2009”. This law protects the dignity of children from sexual exploitation in all forms of digital format and heavily penalizes offenders.

Perhaps the most heinous case regarding child pornography and abuse is the case of Peter Scully, an Australian who was apprehended through a global manhunt for creating and selling a child abuse videos and the most infamous one called Daisy’s Destruction sold in the dark web. Scully was tracked down and arrested in Malaybalay City in southern Philippines in February of 2015.

Ever heard of Libel? It is illegal to create written content of unproven stories that will damage the reputation of a person.

Netizens in social media are quick to jump on trending topics pertaining to controversies. Sadly, many of these people tend to put aside their rational thinking and would rather resort into venting out their emotion-based opinions. They tend to create and share unproven stories to add fuel to the fire. There is also a growing trend of people creating fake news that its sole purpose is to discredit and dishonor the person in topic while generating income through cunning “click bait” methods.

4.) Use of keyloggers or spyware

Keyloggers and spyware aren’t necessary illegal, it’s the purpose of usage that is illegal.

Due to the many features these sorts of tools can do, there are many crimes that can be committed using keyloggers and spyware. There are keyloggers that can save and track what you’ve been typing on your keyboard and spyware that can do screenshots of your desktop to see which applications you are using and which links you are clicking. These and more can be done by criminals without your knowledge or consent.

There are people who stalk or spy on other people or institutions and they’ve used these powerful tools to their advantage. Credit card theft, identity theft, “leaking” or monitoring of someones private files, stalking, gathering login credentials of private accounts, are just some of the common crimes that can be committed by the use of keyloggers and spyware.

There are plenty of people who are now interested in the underground world of hacking. Do not be one of them. With vast resources online, hackers are now able to develop their skills through online information and assistance from other hackers as well. Hackers see hacking as a sort of thrilling adventure where they’re able to bring down institutions, businesses, and personalities. Because of the security threat they impose, hacking is heavily penalized by law.

An example of a hacking crime was the data breach in COMELEC’s website in March 27, 2016. Members of two underground hacker organizations, Anonymous Philippines and LulzSec Pilipinas, worked together in defacing COMELEC’s website and publicizing 340 gigabytes worth of voter’s information online 5 days after the hackers have breached the institution’s data base. They were able to leak sensitive information of registered voters such as full name, addresses, passport numbers, even finger prints.

The National Bureau of Investigation on April was able to apprehend two suspects, Paul Biteng who was a 20 year old IT fresh-grad from Anonymous Philippines and Joenel de Asis who was a 23 year old Computer Science graduate from LulzSec Pilipinas. Biteng admitted defacing the website while de Asis admitted in downloading and leaking the voter’s information online. Both hackers claimed that they only did it to prove to the public that COMELEC was vulnerable to such attacks but they had no intentions in sabotaging the upcoming presidential elections. It is believed that there is a third hacker involved but is still at large. 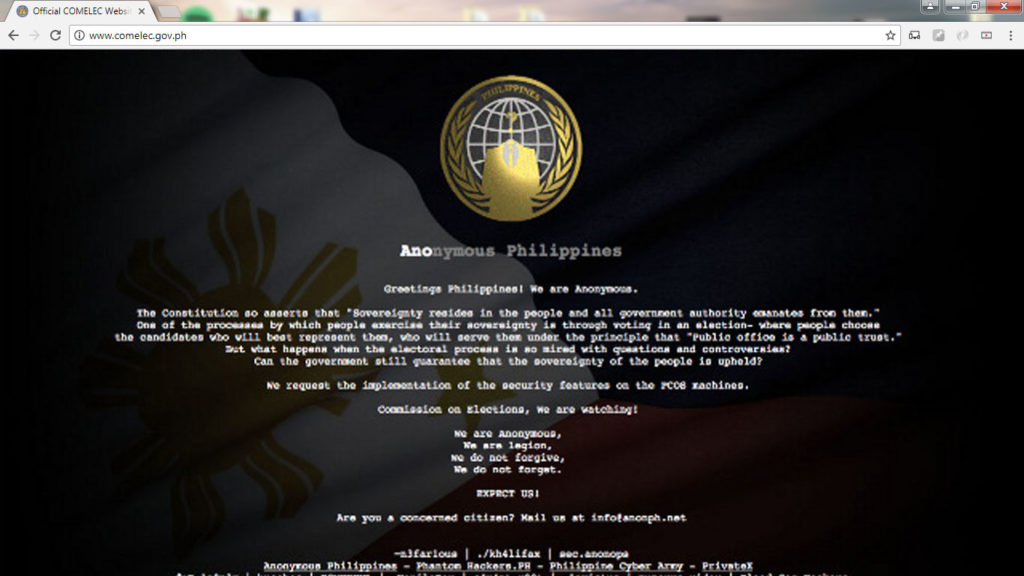 Adoption in the Philippines